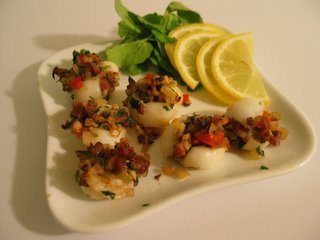 A few weeks ago, Stephen from Stephen Cooks posted a recipe for Baby Calamari Stuffed with Shrimp and Pancetta. I thought the idea was fabulous and decided to make my own version.

For the Chinese New Year, Fufu and I organized a Sichuan “hot pot” diner to celebrate the year of the Dog. Hot pot, or “huo guo” (火锅), is a home favorite for such celebrations. It resembles the western “fondue” in that diners cook a variety of meat, seafood and vegetables at the table in flavorful broths. After this great dinner, we still had tons of leftovers uncooked ingredients including some baby squids. The day after I cooked those delicious baby squids stuffed with prosciutto inspired from Stephen’s Baby Calamari Stuffed with Shrimp and Pancetta.

To do this, I used the trimmings from a piece of prosciutto ham bought at a discount price from the butcher as well as some frozen baby calamari from a local Chinese grocery store. The prosciutto ham was cut into very fine cubes and cooked with onions, garlic, red peppers, salt and pepper. Near the end, I also added the chopped tentacles from the squid and some chopped parsley. I then stuffed the squids and baked them for about 5 minutes in a 375º F oven and an extra 2-3 minutes under the broiler.

I served them with a bit of olive oil and reduced balsamic vinegar. Ideally I would have reduced the vinegar a bit more in order to increase its thickness but both Fufu and I were starving so time was limited. I also found that the addition of lemon juice added a fresh dimension to the dish. We both really enjoyed the squids and will probably cook something similar again. 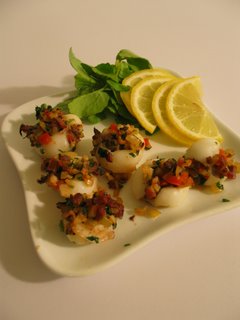 Cheers to you Stephen!

This is a nice little dish. Shared something similar with both dim sum and tapas, but something different at the same time.
I just loved it, simple and good. And it's fun to make too.