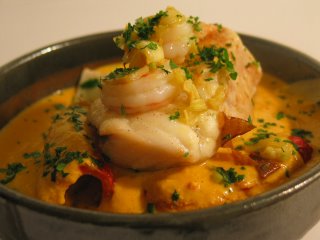 I'm trying to eat more fish. The problem is that I generally suck at cooking fish. This time however, the result was more than acceptable although I still feel that I could have done better.

I first prepared a sauce using cooked ginger and carrots, a few slices of red pepper as well as chopped shallot. I simply placed all these ingredients in my blender along with cooking cream, srimps, garlic and some spices (curry powder among other things). The sauce was very nice; I could make a soup with it by diluting it slightly with water. 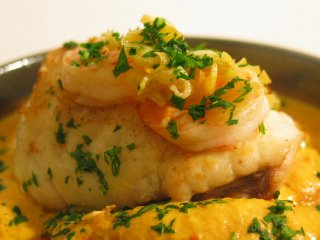 I also oven roasted the rest of my red pepper along with a bulb of fennel cut in quarters. This never fails and the vegetables were also quite good too.

Then came the monkfish filet. I fist pan fried it on medium heat and finished cooking it in the oven. This is where I should strive to improve next time. The problems were as follow:

As you can see on the picture, it was served with shrimps cooked in garlic and olive oil... another never-fail-recipe!

This is a lovely dish.The fish goes really well with the roasted vegetables and the curry sauce is just awesome.