Brie on the BBQ 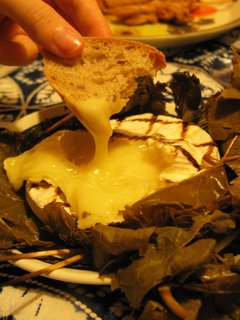 This is one of Fufu's summer favourite. Most of you already know about baked brie's delicious gooeyness. This version is interesting because the grill adds a little smoky flavour that is very pleasing to this old classic. 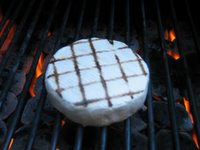 First step: add grill marks on the cheese by placing it directly on the BBQ. This takes only a few seconds as the brie crust char very quickly. If you leave your cheese on the grill for too long it will melt and you won’t be able to retrieve it. Be fast and attentive here! 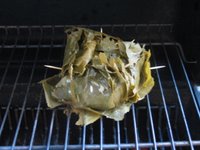 The second step consists of wrapping the cheese in grape leaves (or corn husk, or blanched leek, etc.) and using toothpicks to secure everything. This prevents the melted cheese from dripping and makes it possible to handle the cheese when ready. If you choose ingredients carefully, you can add flavour to the dish at this step. Roasted red peppers, for example, can add a very nice touch of sweetness.

After a few minutes on the upper rack f your grill (or on the main grill at a fairly low temperature) the cheese is ready to serve. To enjoy it, simply dip your favourite bread in it and serve with your favourite summer wine. 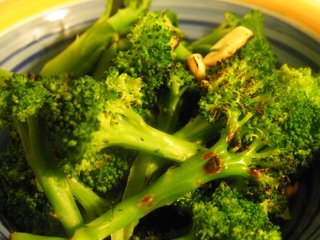 For some reasons, I had a lot of really bad ideas in the kitchen recently... and this one was a particularly bad one.

Since I got my BBQ, I am grilling almost every day. Its fun and it keeps the heat outside. But some things are just better when they do not touch the grill. Broccoli is one of these. Grilled broccoli tastes awfully bitter and is truly unpleasant. Don't try this at home.
Posted by MagicTofu at 12:22 p.m. 3 comments: 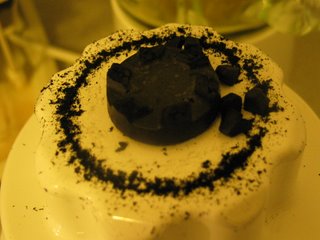 Sometimes you think you are brilliant but reality keeps reminding you that your own stupidity is hard to evade.

A few days ago, I decided to make a soup out of the many asparagus stems I kept in the freezer... you know the woody parts of the plant that most of us discard when preparing asparagus? I thought puréeing these to make a soup was a great idea but the only thing I was able to do was breaking my blender. While I was busy doing something else in the kitchen, long asparagus strings blocked the blender blade which in turn destroyed the rubber drive which linked the blade to the motor.

It can be repaired but I really feel silly.
Posted by MagicTofu at 12:20 p.m. 1 comment: 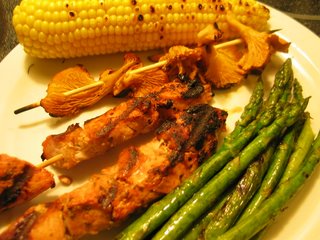 My mom gave me her old gaz BBQ a few weeks ago. BBQ are really nice thing to own! As soon as we received it, Fufu and I went straight to the fridge to find things to grill: corn, asparagus, some ready made pork kebabs and a few chanterelles we picked in the woods. Not all worked well, the chanterelles for instance were not at their best, but we very much enjoyed that very simple meal.

It's so nice to BBQ in the summer: the home stays cool no matter how long you cook ... and grilling while drinking a beer never fails to bring out the man, the real and hairy one, in anyone.

Even with green houses and all the modern food technology available to entrepreneur wishing to make seasons disapear, tomatoes still taste better during the summer months. Its all about the sun I guess... just like for the tomato's best friend: basil. 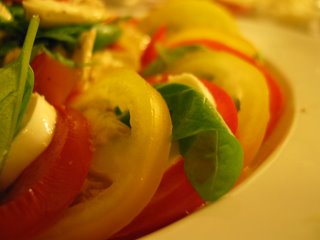 That reminds me of this classic summer salad made of tomatoes, basil leaves and mozarella cheese. The key to this dish, in my opinion, is to sprinkle your salad with a nice amount of salt just before serving. Some people add a simple vinaigrette to this dish but I believe this to be totally worthless, if not innapropriate, when you have good fresh ingredients... the tomatoes will bleed their delicious sweet and sour juice anyways. 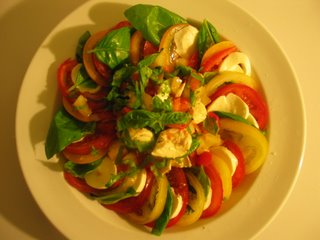 A few nice dishes I did not write about... yet

As you know, I took a few months off blogging and although having a weird work schedule preventing me from cooking as much as I would like, I did prepared a few nice dishes over the last months. For the most part, I did not take any pictures and my very poor memory does not allow me to recall exactly what I ate. Fortunately, I did take a few pictures here and there of certain dishes which I'd like to share with you. You won't find any recipes here as I forgot almost everything about these experiments but smart cooks might find ideas they might want to juggle with or offer comments on similar experiments of their own. 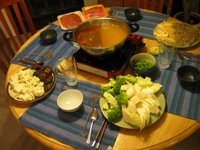 Chinese 'hot pot' or “huo guo” (火锅): this is a winter favourite here at home and it certainly does not require long hours of preparation to enjoy. Like fondue, almost everything is cooked at the table in a variety of flavourful broths. The traditional Szechwan 'mala' broth is seasoned heavily with hot peppers and Szechwan peppers and can be very, very, very, very… spicy. As for myself, I love it the day I eat it and hate it the next day... I'm not sure I'll give more details here, but let’s just say that this dish is spicy for quite a long time after ingestion. 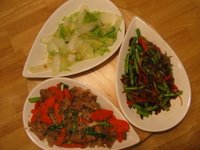 Living with my adorable Chinese partner, I often Chinese food at home. One of the great thing with Chinese cooking is that the produce needed are usually fairly cheap (e.g. cabbage, rice or tofu) but always delicious. Take that napa cabbage dish (the top left dish on the picture), it costs next to nothing, can be enjoyed year round and complement almost anything... and I bet dieticians would say that it is very healthy. 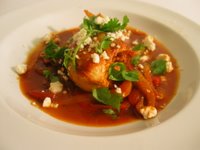 Now, back to North America... If memory serves me well, this dish is chicken in chipotle adobo sauce. Mexican and Americans living in the South West might laugh but true Mexican restaurants are almost nonexistent in this part of Canada and it takes some imagination and a trip to the local Latin-American grocery store to find out how Mexican food might taste like. I'm not so sure I did my job properly but this chicken did taste quite good with its cilantro and queso fresco toping. I have the feeling that roasted corn kennels would also make a nice toping here. Feel free to comment on this one, I still have a lot to learn about Mexican cuisine especially if it does not include taco or tortilla. 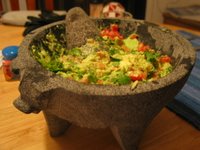 Another Mexican dish: guacamole. I went to Mexico City a few years ago for a conference. I didn't stay there long but took the time to visit the local markets. I found this beautiful molcajete (a Mexican mortar and pestle) made of volcanic rock. Unfortunately I haven't used this great cooking utensil that much but every time I make guacamole, it serves both as the preparation and serving bowl. Nothing says summer like guacamole, corn chips and cold beer so if you live in the northern hemisphere it is the right time to feel inspired. 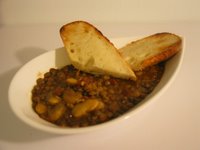 Do you remember my Jamaican inspired pig tail stew? After eating the stew, we still had quite a lot of delicious broth so we decided not to waste anything and cook lentils in it. That was perhaps my greatest culinary discovery of the year. All the flavours from the stew were there and the gelatine from the pig tail formed the most delicious and unctuous sauce one could imagine for lentils. I am now thinking of cooking all my lentils with pork hocks, tails or trotters... too bad for my vegetarian friends! I wonder if one could use agar agar and other vegetarian ingredients to achieve that level of legume goodness. 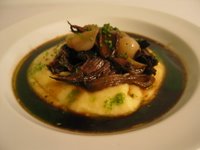 The fact about most meat is that there is only two ways of cooking it: you either both sear it and serve it rare to medium or you cook it for hours (smoke, braise, stew...) until it becomes deliciously tender. Almost anything in between is tough and chewy. In my family, beef blade roast has been on the table since long before I was born. It’s a very cheap but quite tough piece of meat with a huge bone in it. We usually cook it for hours with onions and mushrooms, sometimes a bit of wine and some thyme. The end result is always delicious and so is the resulting sauce. This sauce is worth any fancy and expensive sauce you could think of and should not be wasted under any circumstances. Mashed potatoes or egg noodles are perfect starches to soak up this sauce and so is polenta (as shown on this picture). 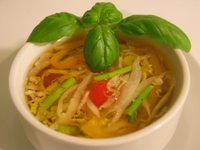 Sometimes however, what we crave for is more on the light side. This soup was made with a few vegetables that were sitting in the fridge. I don't recall what kind of broth I used but if I had to make a similar soup today, I would probably use a lemon grass (or maybe kefir lime leaves) and basil flavoured broth. 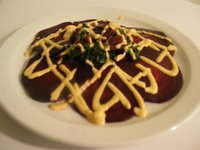 Another nice summery dish, especially now that fresh local beets started to appear in the markets, is a beet carpaccio. Carpaccio is a fairly recent culinary invention born in Italy where ingredients are simply presented flat. It is usually made of raw beef tenderloin cut very finely but I don't see why one could not use anything edible... and many have done so. My version was made of beet roots sliced as finely as I could and served with the leaves sautéed in a little bit of oil and a curry mayonnaise. Let's just say that it was simpler version of one of my Paper Chef (non) entry. 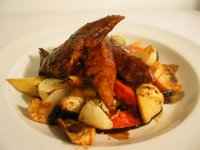 What can you do when your partner does not like chicken but you love it? Transform chicken into something else by adding tons of strong flavours. Fufu does not like chicken here in Canada. To her taste it is bland and mushy. After tasting some good organic chicken here and even better farm raised chicken in China, I understand her dislike of the generic industrial chicken that populate the shelves of supermarkets these days. Let's all be honest here: styrofoam plate chicken does not have much flavour and can be alarmingly tender (not always good thing). But it is also a perfect support for flavour, chicken has a fairly neutral flavour which seems to blend with almost anything. It is this very particularity that I decided to exploit for this honey and balsamic glazed chicken. The bed of root vegetables on which it was served also deserve attention but I'll try to address this in another post. 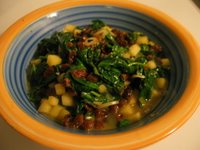 A last dish: spinach with apple and raisins in a sherry sauce. The verdict: good but a little too much on the sweet and acidic side. In other words, too much apple and raisins. Otherwise, a very nice flavour combination.
Posted by MagicTofu at 12:27 a.m. 4 comments: